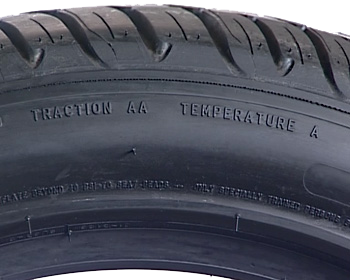 The traction grades, from highest to lowest, are AA, A, B, and C. These different grades are symbolic to how well the tires can stop on wet pavement. This is tested on various courses by the government. The Traction testing is performed on a straight road. So this doesn’t include any cornering or other handling issues.

The treadwear grade is based on the rate in which the tire wears down under controlled conditons on a government test track. The treadwear can vary based on an individual’s driving style, climate, or road conditions.

The temperature grades are rated as A, B, or C. A being the highest and C being the lowest. These rates are compiled by the tire being placed under extreme temperatures in controlled environments. This temperature test is also something that is done while the tire is standing still. The tire spinning could cause the tire to fail a little quicker than in the tests.